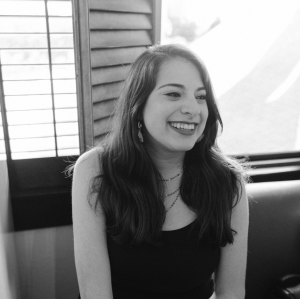 Originally from El Paso, Samantha Skory has been an invaluable San Antonian for the last eight years. After graduating with a Psychology and a Communication degree from Trinity University in 2016, she continued pursing her education and received her Master’s degree from St. Mary’s University in International Relations in 2020.

In addition to international relations, she has also worked as a graphic designer for various marketing and communication offices, as well as the Art Director for the Taylor’d For You team. Taylor’d For You is an organization that builds up San Antonio through fashion and community involvement. Over the last 5 years, they have raised over $120,000 for local nonprofits. Graphic design has allowed Samantha to embrace her creative side while also advocating for local nonprofits, helping shape event experiences, and bridge the divide between art and communication.

Samantha is very interested in international politics, history, and the Cold War. She is currently learning Russian so she can expand upon her research on Eastern Europe and its global impacts which is especially prevalent now. She lived in Copenhagen, Denmark in 2015 and fell in love with its civic infrastructure and architecture. She has always been a huge fan of mid-century modern design and architecture because of its thoughtfulness and articulate nature in both beauty and utility. She is beyond thankful to serve as the creative chair of Modern in San Antonio (M!SA) so she can talk even more about mid-century design.