San Antonio is a city rich in history, a confluence of cultures and parks, and of course, home to the Alamo and the River Walk. Strolling along the River Walk amongst the tall cypress trees that line the banks, one begins to discover how important preservation is to the city. One also starts to understand how essential it is for new developments to find creative ways to weave into the complex urban fabric, to preserve the essence of San Antonio’s unique culture and character — the very reason why it was designated the first World Heritage Site in Texas by the United Nations Organization for Education, Science and Culture (UNESCO).

The Canopy by Hilton Riverwalk is a 22-story, 195-key, boutique hotel located at the intersection of North St. Mary’s Street and East Commerce Street. It is located at one of the busiest junctions in downtown San Antonio at the pedestrian and River Walk level, which hosts several popular parades and festivities throughout the year. The hotel rises almost 250’ above the colorful barges and the River Walk is nearly 14’ below the street level. The lush tree canopy and foliage along the urban waterway create a microclimate, which is five to seven degrees cooler in the summer and warmer in the winter.  Even when temperatures exceed 100⁰F  during peak summer months, the River Walk continues to be a popular destination for tourists and locals.

Creating out of a Crisis

The concept of the River Walk originated in 1921, designed by architect and San Antonio native, Robert Hugman. The 5-mile long picturesque walk was originally devised as a beautification and flood-control plan immediately following the devastating 1921 flood that killed more than 50 people and left several of the downtown streets and neighboring communities inundated with 12 feet of water.

It includes 31 unique masonry staircases, 20 arched bridges (which appear to be modeled after those in Venice, Italy), boat landings, rusticated retaining walls, fountains, and an outdoor stage and amphitheater, making it one of the world’s most recognizable urban linear parks in the world. Ensuring a seamless connection between the Canopy Hotel and the River Walk’s unique elements was just one of the many challenges faced by the entire team.

Another challenge of the project was finding the right balance between the old and new, both on-site and among the surrounding historic context. The existing building on the property was previously known as the Alamo Fish Market, and later, it housed the O’Connor & Sullivan bank, following the Civil War. The original stone façades were catalogued and carefully deconstructed piece by piece as directed by the Historic Preservation Architect, Charles John with H.S.I. Design. The monolithic stone pieces were preserved in storage until it came time to rebuild the facades and restore them to their original hue and character.

Each monolithic stone was meticulously inspected, refined and reinstalled by a team of skilled masons, one-by-one, from the ground up. As each stone was carefully positioned and set, the historic facades began to reinforce and complete the abutting new hotel design elements like a Keystone at the apex of a masonry arch. Some of the original façade’s cut-stone details had to be recreated from the inventory of salvaged limestone harvested from the demolished interior walls and hand-cut to match the original historic design elements. Several of the original stone elements were altered or even removed entirely during previous renovations, while many others had deteriorated due to weather exposure.

The other building that significantly contributes to the Canopy Hotel’s narrative, is the neighboring Esquire Tavern, which is owned by Chris Hill, who also happens to be the developer of the hotel. It  opened in 1933 to celebrate the end of Prohibition and is known today as the oldest bar on the River Walk. The 100-foot wooden bar top is the longest in Texas and is an obligatory stop for those visiting the Alamo City. The exterior masonry walls abutting the west side of the hotel have been partially uncovered behind the cloak of deteriorated cream plaster and carefully restored to its original nature.

Large sections of Esquire Tavern’s exposed natural limestone and brick walls now serve as a warm, textural backdrop to the hotel’s open-air River Walk patio experience. They also reveal themselves as accent walls for several of the interior administration and lobby areas. At the exterior patio, the two story masonry walls of the Alamo Fish Market and Esquire buildings appear as if they unite as one to support the cantilevered floors above.

The guestroom floors extend over the north end of the exterior patio and hover over a portion of the adjacent Esquire Tavern, which was fully operational throughout the entire duration of construction. The structural engineering solution involved creating a robust concrete podium and foundation that supports the tower’s cantilevered floor plates, which extend about 17’ over the adjacent building in some areas! The cantilevered steel and concrete structure required a 6ft deep concrete mat slab with 124 augercast piles, which were drilled as deep as 83 ft.

The exterior patio that overlooks the River Walk is home to a historic red brick cistern. It was used more than one hundred years ago as a reservoir to hold rainwater in an era before the distribution of reliable city water. This fully restored design element was originally located in the basement of the Alamo Fish Market building and buried under mounds of earth.  It was finally uncovered in 1977 by an archaeological team during a restaurant renovation. During the construction excavation process on the hotel, the fragile cistern was carefully excavated, documented, dismantled and rebuilt with integrated, wraparound banquette seating. Most of the debris and artifacts found within the original cistern included a variety of glass bottles, jars and ceramic wares were used in the  design of the open-air bar and restaurant.

Managing the Complexity of Construction

Another challenge was that daily construction activity couldn’t impact operations for neighboring properties, nor could it inhibit tourism and access along the River Walk. From the onset of construction, there was very limited vehicular access and circulation with ongoing activity on all four sides of the project. The design team also had to fit 7,500 sf of program space onto a 6,000 sf site. The construction team had to carefully plan and coordinate street closures on one of the busiest streets in downtown during some of the most high-profile events and river parade festivities throughout the year.

Sundt, the project’s general contractor, made certain that all safety measures and protocols were implemented around the clock, especially during the peak of the pandemic.  When large construction equipment and cranes were in operation, the ground crews stayed on high alert and carefully orchestrated each move as large materials hovered overhead. Most of the challenging operations had to occur early in the morning in order to minimize any downtown traffic impacts.

There are several features and amenities that set the boutique hotel apart from others. The hotel preserves as much of the existing historic structure as possible and seamlessly integrates them within the new and vibrant amenity areas. The finished product successfully unites the historic building with a refreshed, yet localized hospitality concept.  There’s approximately 135,000 square feet of interior program space with an additional 4,000 square feet  of outdoor terraces located at the River Walk and nestled amongst the tree canopy on the third floor. The outdoor private balconies at the cantilevered north-facing guestroom suites are also positioned adjacent to and above the bald Cypress trees to capture views of several downtown landmarks and reinforce the notion of being perched in a treehouse on the River Walk.

There’s ample River Walk connectivity with an inviting outdoor patio and bars that provide great vignettes to the surrounding historic buildings. During the popular River Parades, guests also have front row seats and aerial views of all the action as the barges and vibrant floats pass by. At street level, the lobby and retail space leads guests and tourists to the third level lounge and outdoor terrace, which is cantilevered above the streetscape and River Walk patios below.

The pedestrian experience is also enhanced by introducing vegetation and trees along the street for respite from the sun, especially during the summer. The indoor and outdoor shared public spaces support community and social connection, serving as gathering places that unite locals and tourists. Pedestrians catch glimpses of activity as they venture closer to the building, drawn in via the River Walk patio’s charming gas lanterns or large entry canopy that cantilevers and extends into the two-story main lobby featuring two custom chandeliers comprised of gold-leaf medallion chains with a hammered, antique finish.

The interior design team at MARKZEFF infused the project with industrial elegance which complimented the remains of the 19th-century building. Their mission was to accentuate and draw upon parts of the original building to influence the interior style throughout. Through thoughtful selection of materials and craft, the overall plan was to interlace the project design with the complex historic urban fabric of the Alamo City.  To avoid the monotony of exposed concrete surfaces throughout the interiors, the design team worked carefully with the masons, contractor and structural engineer to conceal as much of the robust concrete structure by encasing it with the salvaged, natural limestone and brick walls from the Alamo Fish Market building. This integration of past and present is on clear display throughout the podium levels of the hotel, especially in the main lobby.

To infuse the neighborhood’s essence into the design, the walls are adorned with local artisans’ work, and neighborhood finds, from fabric to furniture, brighten each guest room and public space. A palette of natural and warm materials creates calm and tranquil guestrooms. The suites feature  handsome oak canopies with black-and-cream rugs and custom furnishings. The brawny, yet soothing concept continues at the third floor interior lounge, where flooring and structural walls of polished concrete are complemented by textiles and a patchwork rug. Life radiates from the neighborhood and into the lobby through the floor-to-ceiling industrial windows located on the hotel façade. Natural light shines bright throughout the day, while at night the interiors glow like a streetlamp filled with energy and excitement.

Although there are several hotels for people to choose from these days, there are few that actually engage with the surrounding communities and infuse it with historic, artistic, culinary, and cultural elements like the Canopy Hotel does. This reimagined connection with people and place, creates a model that enhances the overall guest experience and appeals to a wider array of visitors. Based on Gensler’s design research, the Canopy Hotel reflects several trends outlined for the hospitality sector, which include:

Hotels as the Third Workplace

Since work/life boundaries are now blurred, hotels can become extensions of the hybrid “work from anywhere” experience. People may now extend vacations because they are supported by hotels with lounges or coworking spaces.

The top amenities that travelers booking hotels are looking for, especially when those desirable amenities are located outdoors.

The Canopy Hotel is a catalyst for growth and revitalization of the entire block along Commerce St. At the onset of construction, the Esquire Tavern was one of the few active businesses in the area for a number of years. The new project underway is the Floodgate, a 17-story apartment tower, which rises between the recently restored Witte Building and the Esquire Tavern.

With the Canopy Hotel and surrounding new development, this stretch of the River Walk and Commerce Street has been revitalized as a dining and visitor destination, also connected to the historic San Fernando Cathedral’s Main Plaza and the hallowed grounds of the Alamo.

Today, the hotel serves as a model for future development along the River Walk that endeavors to strike a balance between a design that is both contextual and contemporary. The project’s leadership and design team embraced the challenge to create a building that successfully integrates and enhances the complex, yet charming historic urban fabric that more than 34 million annual tourists have come to love and appreciate. As many of the locals love to say, 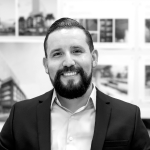